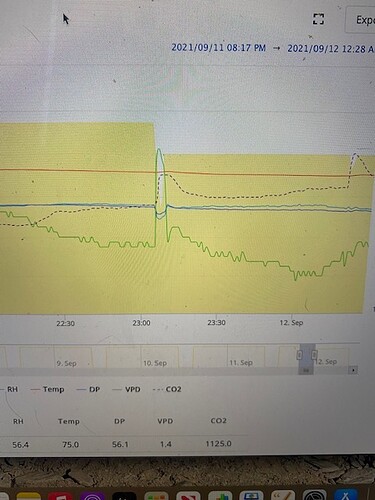 So last night I had some sort of an event that has me puzzled. Around 11:10 pm there was a substantial dip in light performance and Im trying to understand what exactly is goin on.

Im using an HLG 350R which I bought new and have had for about 2 weeks…Ive had the pulse for almost the same amount of time. Up until last night, the light was running at about 94% consistently. It dipped down into the 50% range and when it recovered, has been running at 80% since according to the pulse meter. There was also a dip in humidity and a co2 spike at the same time which has me puzzled.

Could this have been some sort of a power surge? (Im using protectors btw)
Did something happen to my light where its lost 14% of its performance?
Could this be attributed to a faulty sensor in the pulse?

I do really love the pulse and have had zero complaints but I’d love to get to the bottom of this so any help is greatly appreciated!

I wouldn’t worry about it. I’m not sure how your pulse is set up. Mine is hanging around the canopy and occasionally the angle changes causing a slight discrepancy in the light amount. Thats more or less just show you the light is on. Hlg is very reliable ime I have the 650r. The leds don’t degrade for years and even then its small single digit percentages. That light setting is good to let you know if your lights on during the dark period.

I’ve sent back two hlg 300 b-specs because the pulse was picking up exactly what you are seeing but not that drastic. My data stream showed a variance of about 5% with that light on and it would go up and down. The pulse is showing you that the voltage coming out of the driver is changing going lower and your light output is diming verified by the pulse. I would contact hlg and let them know. They are really cool and have great support. My issue was the XLG meanwell driver and hlg had issues. FYI the pulse is a great tattle tale👍🏻. Show hlg the log